Warning: This post is 95% knitting-free, so if you don’t enjoy listening to the babblings of a besotted cat step-mom, feel free to wait for my next post. [Melissa is leaving her comments as well in brackets.]

I’ve been meaning for quite some time to give those of you who like cats a proper introduction to the feline members of our family. We’ll start with the Oakland catsâ€”and promise to do justice to the Santa Cruz cats soon.

a somewhat skinny old guy, with a croak of a meow that lets you know right away when the service isn’t up to snuff. Archy has been involved in several passionate relationships with soft green things over the years, including Brigitte, a lime-green fake-fur pillow from Ikea. Like all our cats, Archy was a rescue. Years ago, Melissa kept finding him perched on her motorcycle in the alley behind her home. He was hardly beyond kittenhood then and had little trouble working his way into her heart and in the front door. [Much to the disgust of Lulu, my extra-toed cat from the east coast, who was still with me at the time.]
Because of his early years on the street (at least that’s what we blame it on) Archy has a bit of the wanderlust. Last fall, while Melissa hiked the Camino de Santiago across northern Spain, Archy took advantage of an inattentive (I can think of other words, but I’ll just stick with “inattentive” for propriety’s sake) cat-sitter and went on the lam. The cat-sitter was fired, friends were called in to look after the remaining cats, and I found myself driving from Santa Cruz to Oakland 3-4 times a week to wander Melissa’s industrial wasteland of a neighborhood, shaking a pouch of Temptations and calling “Archy… Arrrchyyyyyyy.” I also made more visits than I ever want to remember to the Oakland and Berkeley animal shelters. I left with a broken heart each time, not just because of Archy, but because of all the marvelous cats so desperate for a home and a chance to share their love. [Sarah-Hope is a saint! as are my friends.]
In an amazing stroke of good luck, a couple in the neighborhood found him late at night three weeks after he’d disappeared and one day before Melissa returned home. He’d lost almost a third of his total weight and had an abscess in his mouth, but he’s made a fully recovery, as these photos attest.

Here we have Archy close up… 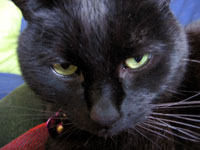 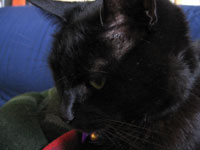 And this is Melissa’s portrait of Archy. 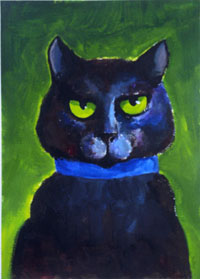 He was younger when she painted this, but he’s definitely grown into the air of crochityness and gravitas that the painting suggests. [It’s rather like Gertrude Stein growing to look like the portrait Picasso painted…]
And, yes, he’s named after the literary cockroach.

We now have the honor of presenting Maggie Gloriana Moo-Woozle, the queen of the household. 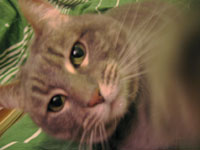 Maggie is stalwart in her affections. She spends a good part of each day looking after her “babies” (those stretchy, kind of terry-cloth-like pony-tail holders), moving them up and down stairs, lining them up at the water dish for swimming lessons and such.
Maggie was an unwed mother who’d just been quitted of both kittens and uterus when Melissa adopted her. She has a rather unusual build (short legs, long back) and favors dolman sleeves on her fur coat. [Maggie is very glamorous!] 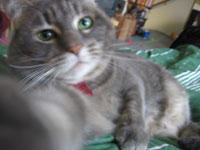 But she has to set limits sometimes, despite her public’s insatiable desire for her image. 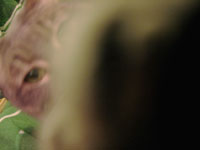 I’ve already mentioned Damian. Now here’s the face to go with the description. 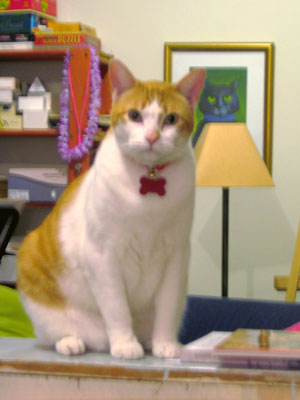 Melissa found Damian and his brother “B” (who sadly did not survive) abandoned in broad day-light, miserable in the heat and sun with eyes still closed and bodies covered in fleas. His rough beginning has not, however, had any lasting impact on his growth. (You will note in the above photo his exquisite man-udder, which spills over his feet with great majesty. He’s frightfully proud of it.)
Because he was bottle-fed, Damian is highly interactive and always willing to pitch in with the project at hand. In fact, his New Year’s resolution was “Be more helpful”â€”and he’s stuck to it with a vengance.
[When I first found the kittens, the vet was not at all optimistic about their survival, but I brought them home anyway, determined to nurse them back to health. But just in case, I only called them “A” and “B” at first, so I wouldn’t become too attached to them. As if!]

Here Damian is helping with the knitting. (Nothing improves the quality of a fiber more than a bit of judiciously applied cat spit, eh?) 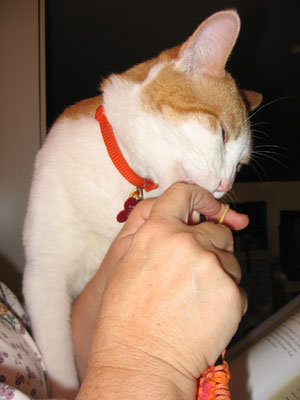 He also likes to help with painting, cooking, mat board cutting, computing, and, of course, eating. His usual strategy is to leap onto the table, then keel over as if he is utterly weak and exhausted… which leads the poor boy to rest his frail head on the rim of any nearby dish… and then, even though he’s about to lose consciousness completely, he manages to find just enough energy to move his lips the least little bitâ€”and you wouldn’t begrudge a dying kitty a last bit of food would you?
Actually, we do, so Damian often spends dinnertime in the bathroom. [The only room in the house with a door!]

When you come to visit, Damian will be glad to nuzzle you with his perpetually wet nose. 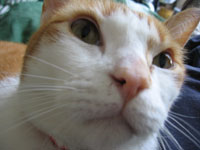 If you’ve made it this far, you must be as mad about cats as we are. Huzzah! for nature’s finest species.