You’ve met the Oakland cats. Now I present to you the Santa Cruz contingent.

Ladies first! This is Beatrice, full name Beatrice Grasshopper Schwartz-Noir, aka Mighty Bezoar. It is difficult to do photographic justice to her thick fur and brilliant green eyes, not least because she is convinced that the digital camera may prove to be a weapon of mass destruction. (“Just because my people haven’t turned on me and ripped me limb from limb yet doesn’t mean it won’t be on their agenda today.”) 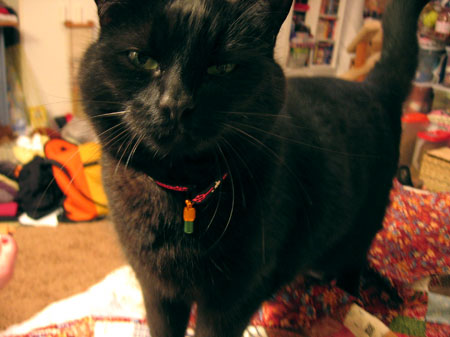 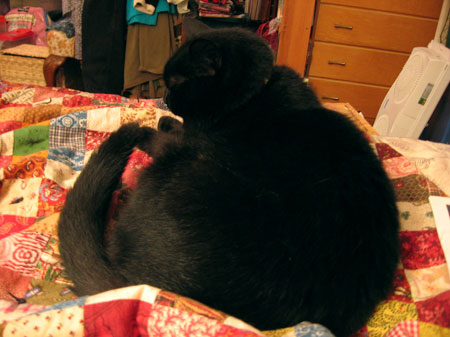 Bea really does have a right to be paranoid. Early on she lived in a car with a homeless man, another kitten, and two large dogs. When the man wasn’t present, the dogs turned on the kittens, killing Bea’s sibling and biting through her femur. She was taken in by my vet as a charity case just when I was looking to expand my feline family, so I lucked out. The vet put a pin through what was left of her femur, and Bea made a miraculous recovery. For the first month Bea lived with me, she had hot-pink, Frankenstein-style stitches running up one leg and had to be kept in a cage that limited her movement, so that her leg would heal properly. During that time she was cuddley and lovey as all get-out, but once she left the cage, she took off at top speed and has been an independent gal ever since.

Sparky and Woody, the “kittens,” are also rescues who came to live with me via my vet. She literally picked the boys up on a street corner, where a man with a box of kittens was trying to hand them off to passing motorists.

Sparky, full name Spartacus Eugene Keeper, has matinee-idol good looks and what appears to be trace of Abyssinian. 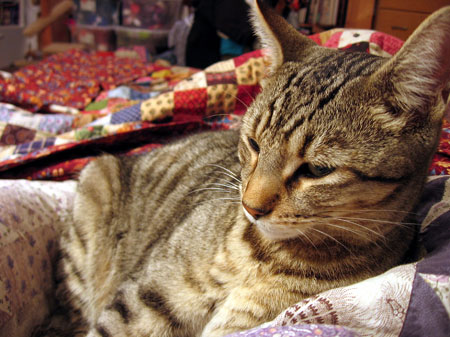 Sparky likes to sit near me in the evening while I knit. In general, he manages to control himself, but every so often the temptation is too much for him and he snatches my ball of yarn and races off through the house with it in a stash-weasel frenzy. 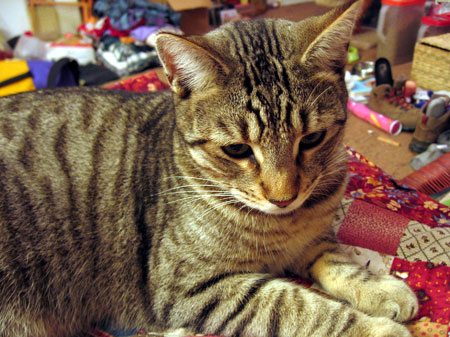 Of course, I have to forgive him. Who could resist this sweet boy?

Woody, full name Woodrow Mycroft Keeper, has taken most of the last year to grow into his nose (an excellent, hunting-tool sized nose like a Jaguar‘s, he’ll have you know). 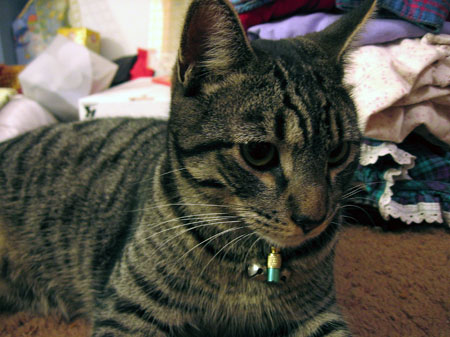 While Sparky is my evening companion, Woody prefers a cuddle in the middle of the night or first thing in the morning. He likes to begin his evenings under the bed (aka The Diogenes Club). Then, he moves to the top of the bed once everyone else has fallen asleep. 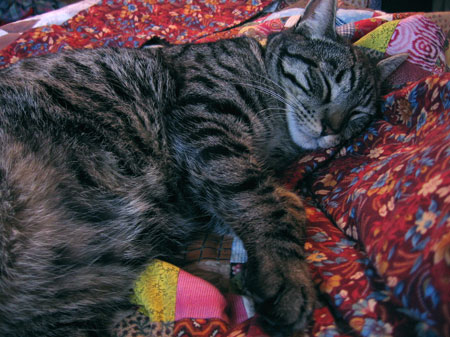 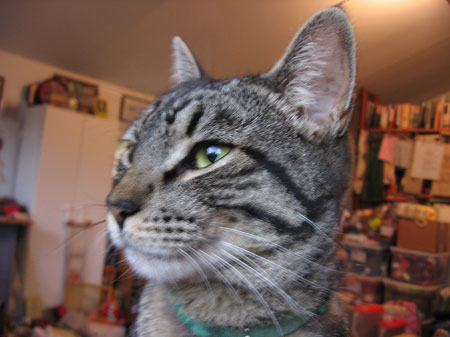 Woody began as the runt of the pair, but has grown into a rugged young fellow and now outweighs his brother by a pound or so.

And there you have itâ€”all cats present and accounted for.