I am a fan of figure skating.
I love kitsch.
I am fascinated by the phenomena of popular culture.

Q: Put these three facts together and they equal?
A: My presence last week at High School Musical: The Ice Tour.

Never mind that I have no appropriately-aged children or that I’ve never seen either of Disney’s two High School Musical movies. I was so there! 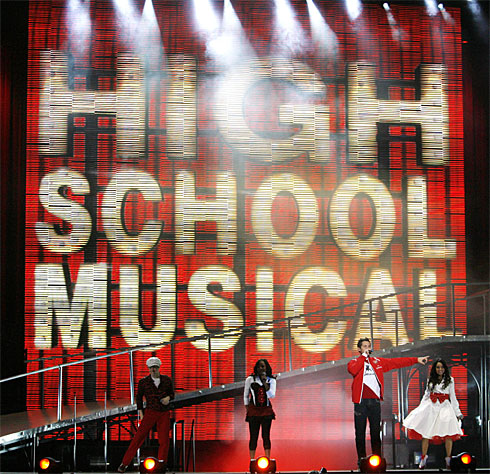 How to describe it? My friend Ellen (she treated me to the performance as a birthday present) agreed that while we couldn’t be certainâ€”never having actually dropped acidâ€”pretty much the show was one giant acid trip. Colored lights. Lots of colored lights. Pulsing colored lights changing colors and whirling about in patterns. Loud music coming at us from all directions. A gigantic video screen at the back of the “stage” with “sets” projected onto it, morphing from one image to the next in oddly organic but surrealistic waysâ€”as if windows grew on walls or trees blossomed from hillsides. The videos were so overwhelming that we’d momentarily forget to notice the horde of ice skaters bopping about to pop music. In the big opening number, most of the male skaters were dressed as basketball players, and at a key moment a dozen or so basketballs fell from the ceiling (I’d looked at the ceiling before the performance started; I didn’t see any basketballs), one in front of each guy, and they scooped them up and started dribbling in time to the music, skating all the while. And the skaters lip-synched. Lip-synching on blades! The crowd went wild when the faux-Troy/Zach tore off his shirt during a particularly invigorating solo. Did I mention the lights?

If you are the sort of person who enjoys this sort of thingâ€”and, while you may be embarrassed to admit it, you know if you areâ€”I heartily recommend the experience.

As for the tragedy…. I’d decided that I was going to try reworking the colorwork tam in Interweave Knits‘ holiday issue as a two-color piece, combining black yarn with a pinky-gold Koigu because, you know, I simply do not have enough works in progress, butâ€”no size 2 and 3 sixteen-inch circular needles. Now I know I have these, but where? I desperately called my LYSs, but they were all closed by then. Argh! So it was back to Rosebud, which is nearing completion and may be wrapped up during this afternoon’s two-hour meeting.