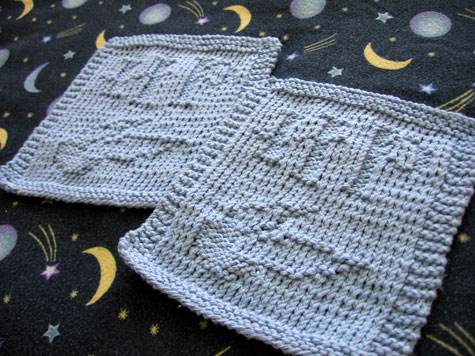 Here are my Harry Potter and the Golden Snitch Washcloths, pattern courtesy of Michelle at InsanKnitty. I have a nephew who will be very excited to receive these when I fly back for a visit next week. I used a small (2.5oz) ball of Sugar ‘n Cream and just got the two cloths with a few yards to spare.

I wanted to put in a quick shout-out for the Procrastiknitter, who has just begun hand-dying and selling direct-from-Australia wool. Check it out here.

Melissa and I took our weekend early this week. (She still worked her crack-of-dawn shifts at Peet’s, but then we had all afternoon and evening together.) This was necessary becauseâ€”I am chuffed to sayâ€”I was able to land her a single ticket to today’s SF Giants/NY Yankees game. Normally, Giants fans hate the Yankees, their fans, and all that goes with them (which is perhaps a bit excessive, seeing as they’re an AL team and not even real competition until the post-season), but Melissa grew up on Staten Island, back in the day when it was still semi-agricultural and comes by her Yankees fan-dom honestly. (I also got a single ticket to tomorrow’s game that went to my friend Sim, another NY native.) So, I will be dropping Melissa off at BART on my way home, and she’ll be spending the day in the sun, most likely watching her team pound mine into the ground. Let’s face it: the Giants are not having a great season.

Thursday evening, we went to the New Music Walk-Through at the columbarium. The columbarium is a gorgeous venue: designed by Julia Morgan (who also designed many of the buildings at my alma mater, Mills College). The rooms are small, but well-lit; almost all have sky lights that let in an amber glow that feels welcoming, rather then funerary. Everywhere one looks are decorative mouldings, arts-and-crafts era tile work, all sorts of wonderful details. This venue is open to the public every day; I would love to sit there on a winter day, knitting while rain pounded overhead.

New Music is not always my cup of teaâ€”too many sustained tones punctuated by toots, with rhythms I can’t quite catch ontoâ€”but we both enjoyed this cellist and hope to hear her perform again (note: the photo at her web site is taken at the columbarium). Most-unusual-instrument award would go to the gentleman who simultaneously played an electronic keyboard and a bugle. The bugle had various lengths of industrial tubing coming out if it, each ending with a dried, bell-shaped length of seaweed, and the sound switched from one tube to the next, depending upon which bugle keys the performer pressed.

Yesterday we walked a bit around downtown Oakland. Our official destination was a show by Farnaz Shadravan at the Joyce Gordon Gallery. Shandravan, who now lives in the U.S. and works as a dentist, trained in Koranic illumination in her native Iran. The gallery featured two series of her works. The first was a group of refrigerator doors engraved with a dental drill with religious texts and motifs. The second, from her Ashura series, featured illuminated x-rays of carved human bones (the carving again done by dental drill) and small metallic objects: bullets, dog tags, and the like. 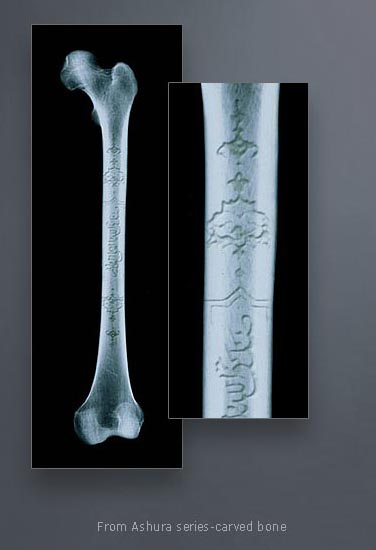 This series, a response to the Iran-Iraq war (she was still living in Iran at this time), was displayed at floor level, with small cushions in front of each piece, so that one knelt, prayer-like to view them. The mix of beauty, vulnerability, and violence in these pieces and the contemplation they inspired felt genuinely religious.

We also admired a wall of pencil drawings by Slava Likhatchev, depicting human hands that were simultaneously realistic and fantastical. One hand was made of money: bills for the palm, the fingers precariously stacked coins. Another was composed of rolled bolts of fabric that seems luxurious and shroud-like at the same time. This is the piece Melissa and I would have purchased if we’d had a few hundred dollars to spare:

Today it’s back to Santa Cruz, where I’ll get some knitting done, listening on the radio to the game Melissa will be attending and enjoying the second of two “weekends” in a row.