On Saturday night, Woody was hit by a car and killed. 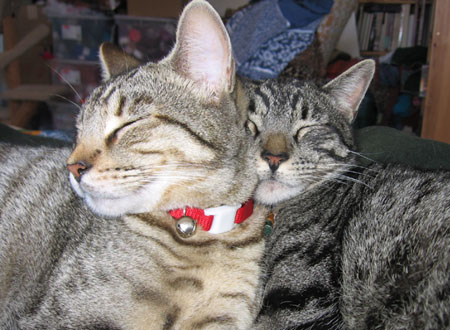 Melissa took this picture of the boys napping together on Saturday afternoon. She and I spent the day at home, doing a bit of spring cleaning, listening to the ballgame, and just relaxing. When we took a quick nap, the boys were right there with us. We finished the cleaning late and went out around eight to get some dinner.

When we came back, there was a message on the phone. We picked up his (not so) little body and drove out to the emergency vet, where we had a chance to say goodbye in a quiet, private room. There was a lot of blood on him, but no obvious external injuries and his claws were intact, so I think death must have come very quickly. I’m having him cremated, which seems excessive and first-world in a way, but I want that little box of ashes to keep with me.

I’d known in the back of my mind that this was a possibility: he’d become such a wanderer and, while I live on a quiet street, some of the nearby streets are busier (and it’s on one of those streets that he died). But I still hadn’t really expected to lose him. He was just a year old, bursting with energy and life, switching back and forth between full-throttle play and rock-like sleep the way young cats do.

I’m deeply grateful that I was home this weekend and that Melissa was with me. I’m also grateful for that phone call, hard as it was to receive. I know what happened; I didn’t have to spend nights awake worrying about him; I didn’t have to wander the neighborhood calling for him and posting signs.