Tragically, the A’s lost Sunday’s game, despite the fervent cheering of the many knitters and other needleworkers in attendance. But we knitters are a stalwart bunch and remain faithful despite the setbacks.

Not only was Sunday Stitch ‘n Pitch, it was also Hispanic Heritage Day, which meant we were treated to some folklorico before the game. 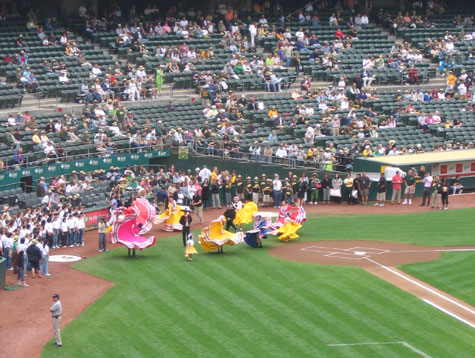 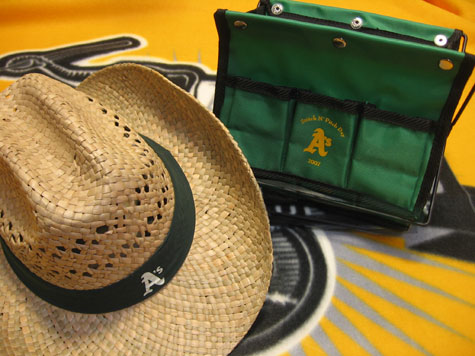 And, because we were among the first 10,000 fans, Melissa and I also received A’s cowboy hats. I am so not a cowboy hat kind of a gal, but let me tell you, that was one comfy hat. It’s nice and roomy, the open weave keeps it from being too hot, and it makes a heckuva lot more shade than my usual baseball cap. Much to Melissa’s delightâ€”she has a cowboy hat she likes very much, thank you, and has been frustrated by my disdain for itâ€”I intend to make mine a regular part of my baseball wardrobe. Yee-haw!

As at the Giants’ Stitch ‘n Pitch, I found myself surprised that relatively few knitters brought projects in the team colors. Really, I think we would be more effective knitting missionaries if we took the time to color coordinate. Here’s one knitter who did not have that problem. She was wearing an absolutely gorgeous examplar of the beautiful union that knitting and baseball can be. 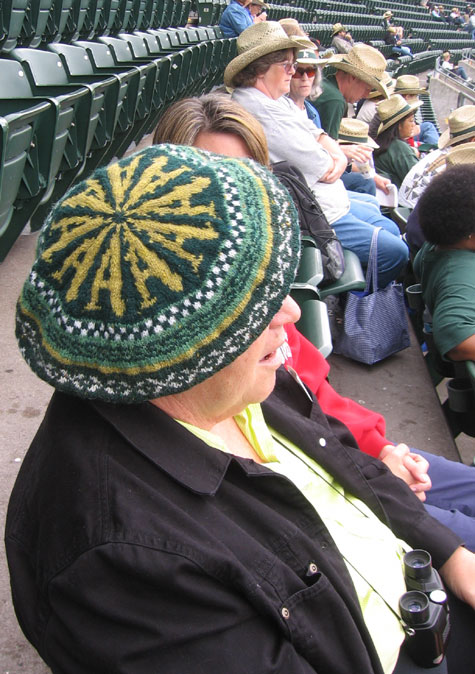 I worked on my Origami Cardi.

I’m down to just an inch or two more on one front panel and then the sleeves, one of which I hope to work up at tomorrow’s all-day meeting. 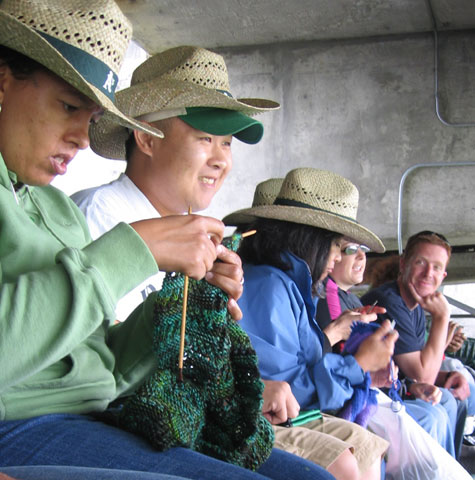 Th day’s big irony was a bench-clearing melee in the bottom of the first. Nick Swisherâ€”who’d just received the Athletics’ nomination for the Roberto Clemente Humanitarian Award in a pre-game ceremonyâ€”was hit by a pitch and charged the pitcher. 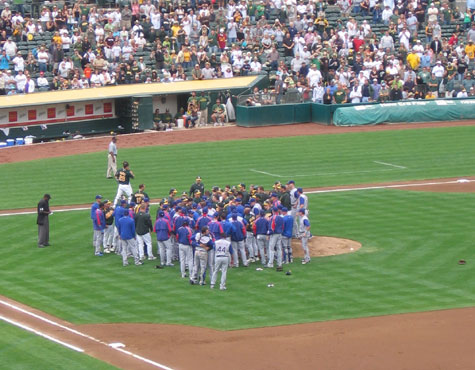 Needless to say, neither he nor the pitcher spent any more time on the field that day.

P.S. Have you seen Nanette’s (of Knitting in Color) new “Bewitching Gloves” pattern? Now I confess that I may convert them into wrist warmers to avoid niggling with all the fingers, but I am definitely buying a downloadâ€”genius!

2 Replies to “Stitching and Pitching”