Here are four cloths worked up in a variation on the stitch Laurie used for my dishrag tag cloth. 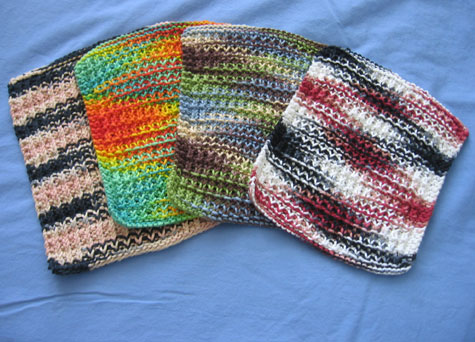 The colors (all Elmore-Pisgah Peaches & Creme) from L to R are Oasis Ombre 176, Mardi Gras 163, Sour Green Apple 312, and Cityscape 211. Not only do these cloths illustrate some of the colorways availableâ€”they also offer a lesson in gauge. I knit each one using the same number of stitches and rows on U.S. size 8 needles, but I worked the smaller three on wood needles, the larger one on aluminum. Apparently aluminum needles loosen up my gauge. Who knew?

I’m absolutely in love with the Mardi Gras colorway, which is riotously happy. 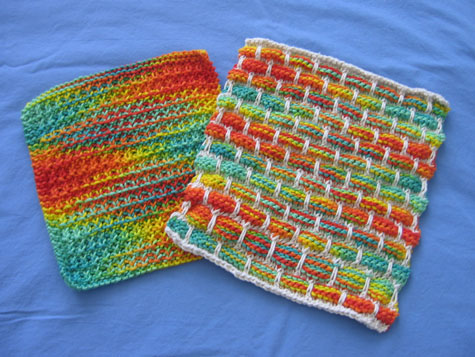 Check it out in the Mason-Dixon Ball Band pattern with a natural background. Those colors just *pop*.

Here’s another pair in Peppercorn Ombre 180. 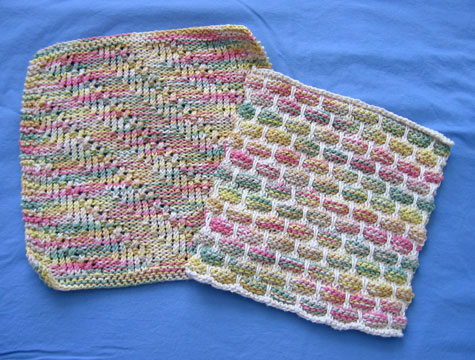 The cloth on the left is worked in the Wheatfields pattern from page 3 of the Dishcloth Boutique. On the right, another Ball Band cloth with a natural background.

And here’s a dishcloth yet to come: 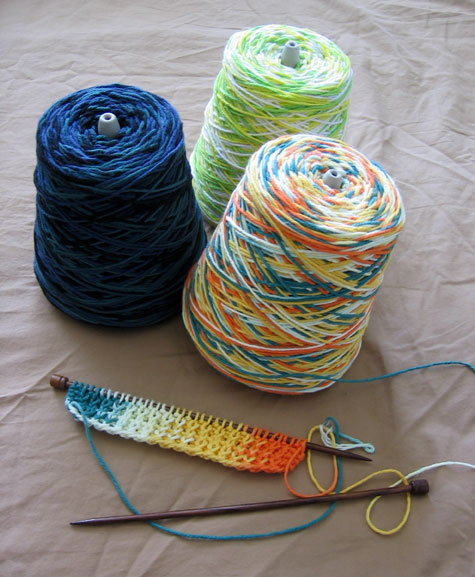 Since I discovered the self-striping Lilly Sugar ‘n Cream at the Michael’s in Emeryville, I’ve looked for it at other Michael’s without luck. I’m not sure why one shop carries it, but the others seem not to. 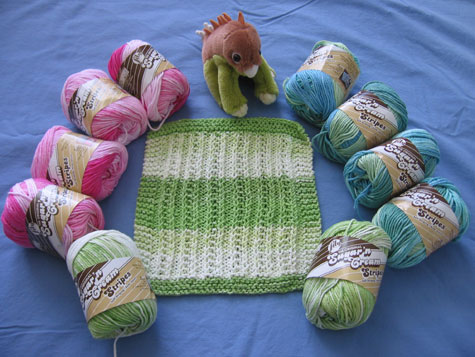 At any rate, Here’s Rowena, our Oregon stegosaurus, posing with some of the different colorways and one completed cloth. (This pattern is from one of the Leisure Arts dishcloth leaflets, I can’t remember which.)

I’m delighted to report that I finally found myself asking a “what if?” knitting question yesterday. I’ve felt so preoccupied lately with teaching responsibilities, that I’ve just been following patterns without dreaming up my own possibilities. The question was simple enough: “What if I work a mosaic-stitch dishcloth from two different self-striping yarns?” The cloth I knit up to answer my question (pic to follow) is fun, though the Sugar ‘n Cream colors aren’t as saturated as I’d like them to be for this purpose.

I’ve had lots of help with all my dishcloth knitting. 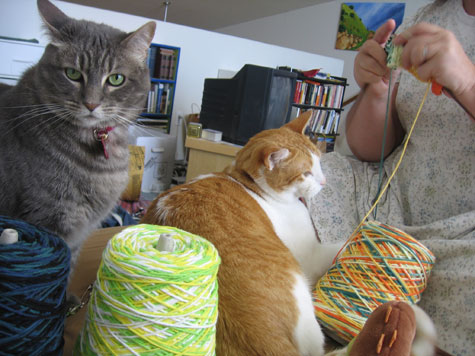 Damian will eventually settle down and leave me to my work, but Maggie just aches to grab those needles and work a couple of “stitches” herself.

P.S. Have you checked out the new issue of Knitter’s Magazine? I particularly like the Jade Empire cardigan.

10 Replies to “It’s All About the Dishrags”